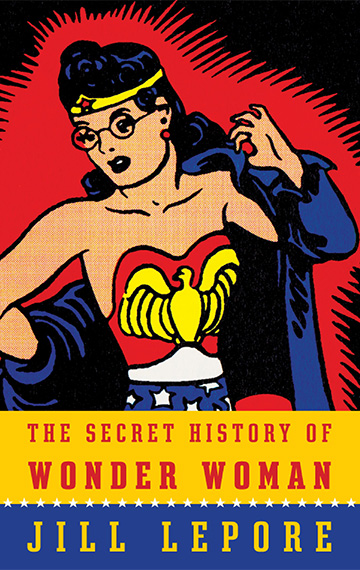 The Secret History of Wonder Woman
By Jill Lepore

With “The Secret History of Wonder Woman” Jill Lepore has greatly strengthened the oft-ignored legacy of comic books as an important agent of cultural change in the 20th century. Since their inception in the early 1930’s as collections of comic strips through the billion dollar mega-films of today, comic books have been beloved and loathed like no other media.

At their peak in the 1940s, a comic book might have sold 2 million or more copies. Each single comic was estimated to be read by as many as 6 people. At any one time, there were thought to be 100,000,000 comics being read.

These were numbers delightful to publishers and fans but terrifying to educators, politicians, scientists and parents. The concern from the “authorities” is somewhat justified. Kids were devouring comics and with the astronomic readership numbers, it was hard to imagine how generations of young minds were being shaped by the illustrated insanity in their pages.

William Moulton Marston was a man made for this exploding cacophony of four-color madness. His creation of Wonder Woman became the perfect storm for so many cultural, scientific and political upheavals that a reasonable argument can be made had the Amazonian Princess never been born America would be a different place.

Marston dumped his bohemian and erratic life experience as a scientist (the creator of the lie detector), a psychologist, a bigamist (sort of), a fetishist and an ardent feminist into the development of Wonder Woman with the clear intention of influencing the direction of popular culture. Lepore’s excellently researched and fully supported premise is he succeeded in doing just that.

Lepore draws parallels between the development of the politics of feminism beginning with the suffragette movements of the late 19th century, the life of Charles Marston and the development and explosive popularity of comic books. With great skill and wonderful prose, she brings these three distinct tracks of history together to culminate in the arrival of the Amazon Princess to the world of man.

Wonder Woman came to America at the beginning of World War II and quickly soared in popularity, rivaling that of comic superstars Superman and Batman. The difference between them was Diana Prince, Wonder Woman’s secret identity, was a free thinker and an agent for social change.

Marston imbued his character with a power and sexuality based not only on her strength but also on her vulnerabilities. That Marston and DC got away with as much as they did is remarkable considering the times. With a historian’s eye on cultural context, Lepore demonstrates how truly radical Marston’s Wonder Woman comics really were. To her credit, Lepore very fairly provides a voice to those who, with some cause, found Wonder Woman objectionable and dangerous.

The most amazing thing about the book is the incredible research Lepore has poured into it. It is well known now that Marston had both a wife and a live-in mistress with his children from both all living peacefully in the same household, but that is about the extent of the public’s knowledge. In fact, the reality is much more complicated and the personalities in this family are so intensely entwined as to have made them interdependent on each other for their entire lives.

The fact Wonder Woman exists at all is tied up (ha!) in the relationships between each individual in the family. The dynamic in this strange household is remarkable but many of the details have remained closely guarded family secrets until recently. Lepore’s masterful mining of data is to be commended and stands as an example of thoughtful and responsible journalism.

Lepore must also be commended for her even-handed treatment of divisive issues like feminism, fetishism and pop psychology. Her book does not force an agenda. It is a rare example of a historian being a historian for the sake of recording history.

When Marston died in 1947 and the character was turned over to more compliant writers, Wonder Woman began a rapid metamorphosis leading to a more saccharine vision of domesticity and conformity. Today she is a warrior princess and in every way an equal to Superman. As of this writing, they are lovers (Batman is wisely concerned about this). It’s hard to imagine what Marston would have thought of that.

On a personal note, I have been a big fan of Wonder Woman for much of my life. Back in the early 70s I started buying Wonder Woman comics and have quite an extensive collection. Of course, the earlier Golden Age books (the 40s & 50s) are out of my price range but DC Comics has produced Wonder Woman Archive editions containing nearly all of Marston’s work.

I went back and reread some of the stories in these books and was absolutely stunned at how much more complex and fascinating the stories were given an understanding of the background and intentions of the creator. Some of these volumes are out of print, but many can still be found at very reasonable prices.

I heartily recommend going back and reading some of this material for yourself. At the end of the book along with extensive footnotes (which contain some fun, meaty facts, not in the regular text) there is an excellent index of stories written by Marston and the issues in which they appeared. I am very grateful to Jill Lepore for writing this book and giving me the opportunity to enjoy these great comic books more than ever.

I am also grateful to Jill Lepore for her contribution to recognizing the immensity of the sociological impact comic books has had on western culture over the last 80+ years. If you are interested in pursuing this further, another recent example of this kind of comic book scholarship which I very much enjoyed is Super Boys: The Amazing Adventures of Jerry Siegel and Joe Shuster–the Creators of Superman.