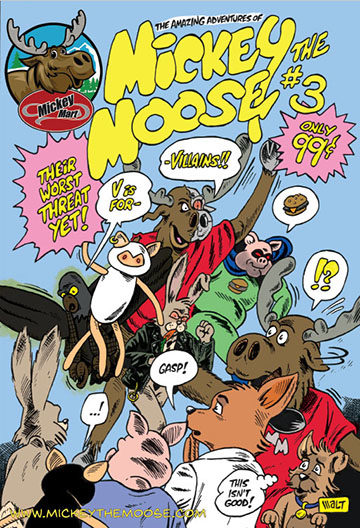 The Moose is on the Loose in this action-packed issue!

This 20-page comic unfolds with Mickey the Moose and his friends being challenged by a group of supervillains who have a grudge against Mickey. A series of battles ensue with the heroes needing to rely on their wits against the powerful bad guys.

Dirk Drudgler and Kelly Walt are back with this third installment of a planned four-part series.

“This is the best one yet. It’s the one we’ve had the most fun putting together, ” says Drudgler.

“It’s nonstop goofy action with a generous helping of the hidden gems our readers have grown so fond of.”