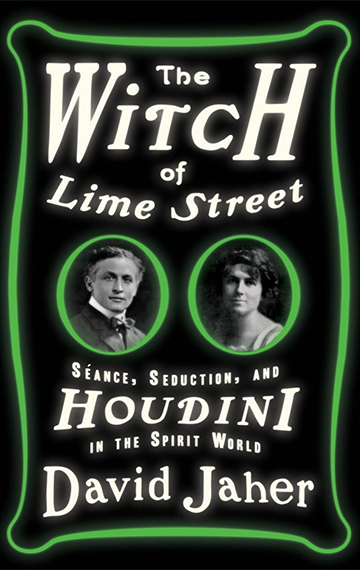 It was an era of brutal, murderous, mechanized war. It was an era where the world around you changed so quickly, so dangerously and so startlingly you had nowhere to turn for safety, or sanity. On both sides of the ocean, especially in Great Britain, the stunning toll paid for the First World War was the near obliteration of an entire generation of young men. For many, such destruction and death could not be the final word. Sweeping into the wounded, bloodied psyche of the western world were men and women who claimed they could communicate with the dead.

It was an era of vaudeville. Necromancy was nothing new, but mass communication was. The combination was potent as spiritualists drew headlines and adherents to the point of becoming a religion. A large number of influential voices, including Sherlock Holmes creator Sir Arthur Conan Doyle, threw their weight behind what many were calling a new branch of science, one that finally broke through the barrier of death. Seances became as common as dinner parties. The bereaved, the gullible and the simply curious flocked to mediums whose bag of tricks included moving tables, musical instruments played by invisible hands, spirit writings and disembodied voices.

The era was also a time of intense scientific empiricism. Science was stretching its frontiers from the smallest particle to the largest celestial mass. Everything was subject to testing and proof and it was just a matter of time before the art of Necromancy and the strictures of Science collided. The flashpoint was a contest created by Scientific American offering a huge cash prize to any spiritualist who could convince a panel of scientists their manifestations were authentic.

Into this seething cauldron of pop culture and experimentation came the century’s first superhero, Harry Houdini. With his dazzling displays of magic and escape, Houdini had become a cultural superstar. He was also the world’s leading occult fraud detector. To win the Scientific American prize money, you had to go through Houdini. Having performed many of them himself, he knew all the tricks.

In the book “The Witch of Lime Street” author David Jaher masterfully tells the stories of the arrival and debunking of spiritualist after spiritualist, often so easily found wanting as to have no need of Houdini at all. However, the tables turned (and flew and rattled) with the appearance of Margery Crandon, a socialite and wife of a Boston physician, whose powers in a seance were extraordinary and seemingly unassailable. She was a rarity in a world of greedy frauds, a medium having no financial interest in her craft. Her remarkable seances had even the most ardent non-believing SA scientists/judges (who tested her relentlessly, some tests falling just short of seeing if she weighed the same as a duck) wondering if she truly had found a way to break on through to the other side.

By intricately detailing the process of seance and science, Jaher manages to give wonderful life to these powerful personalities. The first half of the book documents the development of 20th century spiritualism and the creation of the SA judging panel. The second half, has the World’s Greatest Magician and the Witch of Lime Street, like Ali and Frazier, squaring off. What follows documents one of the greatest battles in the history of magic vs. science. While I found the first half of the book to be somewhat repetitive and slow, the last half I read in one sitting, unable to imagine how this was all going to play out.

Jaher does an outstanding job weaving together not only the efforts of both the magician and the medium to validate themselves but also the anticipation of the fascinated public, who were following breathless media reports to find who would emerge bloodied, but victorious. The book gives no hint as to how the chips will fall and with its narrative structure of short passages, the read is similar to a gripping thriller.

This is a well researched, fascinating and fun read. If they hang in there through the early stuff, fans of Harry Houdini, spiritualism, magic and the early 20th century world will be richly rewarded with a nuanced and totally true ghost story.