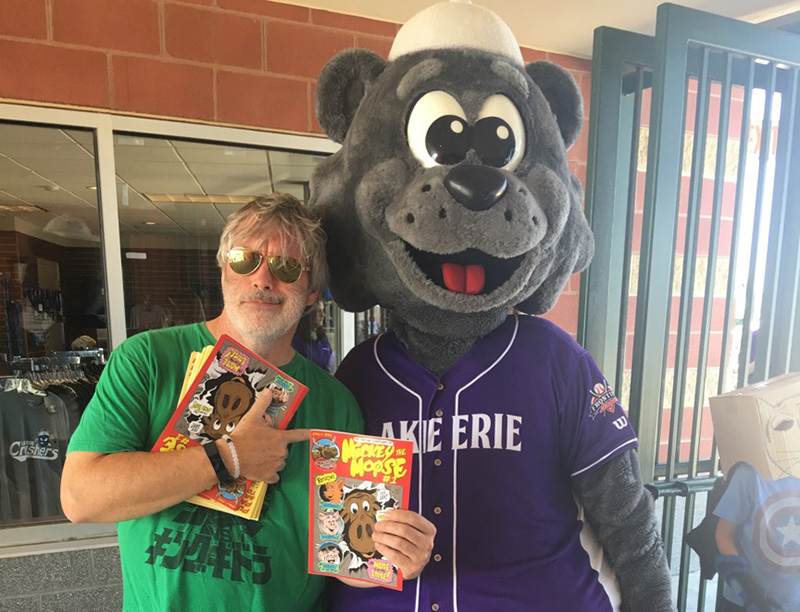 To celebrate, the Crushers management did what any business with fortitude and class would do if they thought about actually doing something fun and interesting. They scheduled a Superhero Day.

Your favorite local comic shop (frequently displaying fortitude and class) used the opportunity to relentlessly promote the Coolest Art Form on the Planet.

Determined to expose the festive crowd to the subtle beauty of the Moldavian Tuna Dance, Shopkeeper Eric needed to be reminded (again!) that comic books, not interpretive fish dances, are considered the coolest art form on the planet.

While his disappointment was profound, he is a true professional. He won over the cynical crowd with a sublime Flounder Arabesque followed by an incredible Upstream Tour En L’air launched from the upper suites into the Beer Garden below.

He spent the rest of the afternoon there, signing autographs for adoring fans.

Sadly, all images of the CAG leader’s brilliant depictions of the aquatic cycle of life were blocked by the anarchists who hang out in the darker recesses of the stadium. Their between-inning shouts, “Basses Enslave Masses!” and “Heroes, not Halibut!” were clearly heard, if not entirely understood.

Regardless, many Crushers fans went home happy that day with armfuls of prizes and fun stuff from the giant Comics Are Go! Plinko Board.

Also in attendance were SKR Comics publisher, Dirk Drudgler, giving away free copies of the Adventures of Mickey the Moose #1, and Shawn Belles, promoting the upcoming NEO Comic-Con.

Everyone had a great time and the plucky lads in purple and white pulled out a 3-2 victory and a series sweep over the dreaded Normal Cornbelters. The Cornbelters dangerous line up is best known for hot bats and their recent incarceration for rude gestures to old women.

Thankfully, Superhero Day was not ruined by this midwestern gashouse gang.